You can buy a hand-made pee Gee trap from us for $50. Each trap includes a perch and two dishes for food and water.

By buying a trap through our program, you agree:

How to pay for and collect the trap

Pay for and collect a trap at our Customer Service Centre, 20 Siding Avenue, Officer during business hours.

How to use the trap

Locals vets who will put trapped birds to sleep

Why Indian Mynas are a problem

Originally introduced to control insects, Indian mynas are a recognised invasive alien species. They are aggressive and compete with native animals for space. They force other birds and small mammals out of their own nests and tree hollows, and even throw other bird’s eggs and chicks out of their nests.

Indian mynas build large messy nests in roofs from sticks and any available rubbish they find, which can create fire risks in buildings. The accumulated droppings and mites from nests in house roofs are a breeding ground for disease, and inhaled mites can cause asthma and hay fever. They also spread rubbish about when they forage in open rubbish bins, creating a public health risk.

How to reduce the number of mynas in your garden

The pest Indian myna has a chocolate brown coloured body, with black head and neck. It has a yellow beak, eye patch and legs, and has white wing patches that are visible during flight. 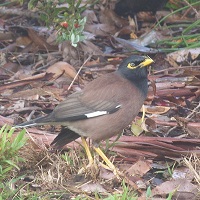 The Native noisy miner has a pale grey chest and head, black eye patch, olive tinge strip along wings and flesh-coloured legs. As a native species they are protected and should not be trapped or injured in any way. 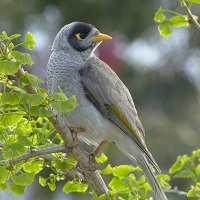